A presentation at Heritage University @ CBC Week 05 in February 2020 in Pasco, WA 99301, USA by Jacob Campbell 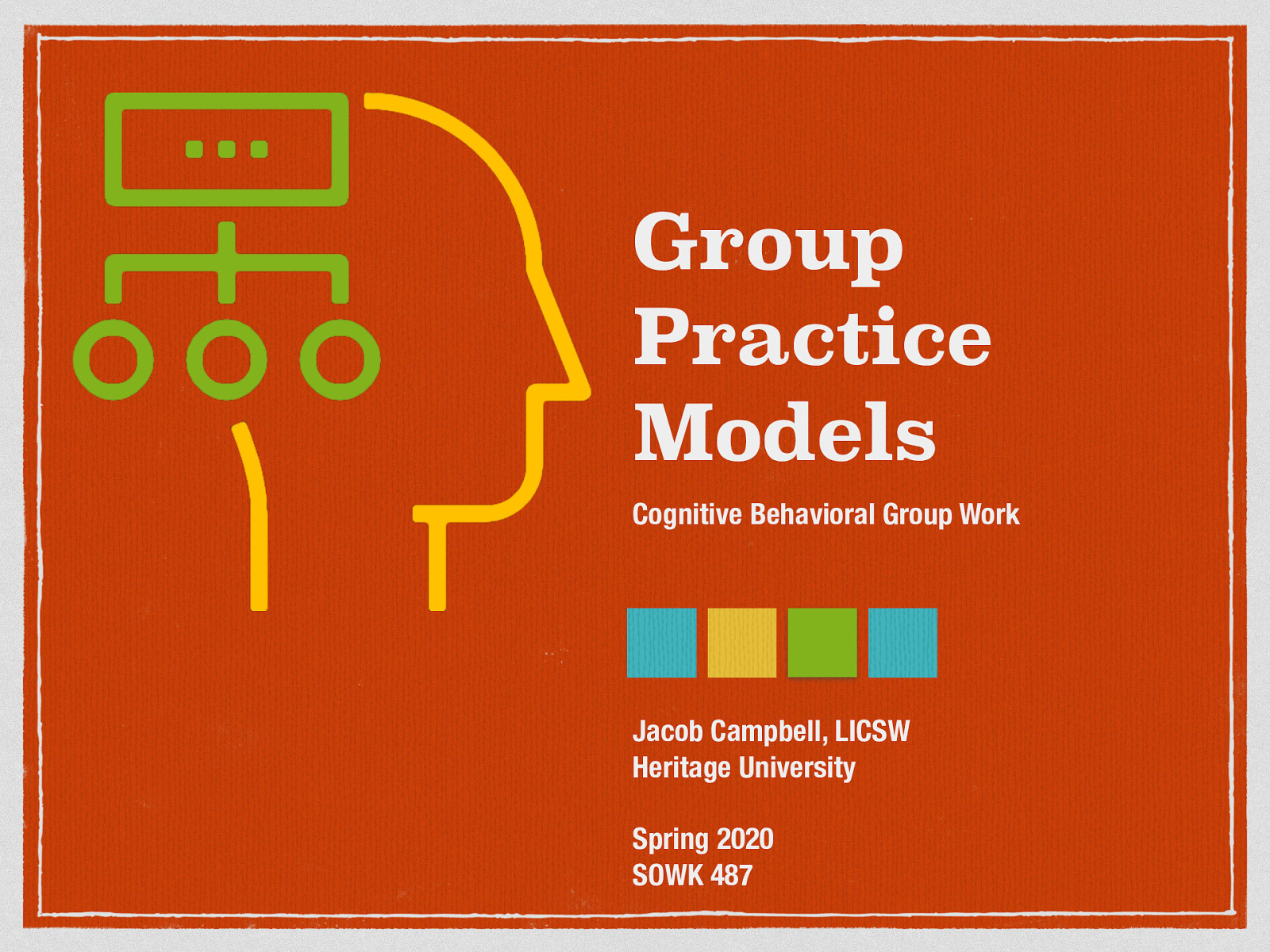 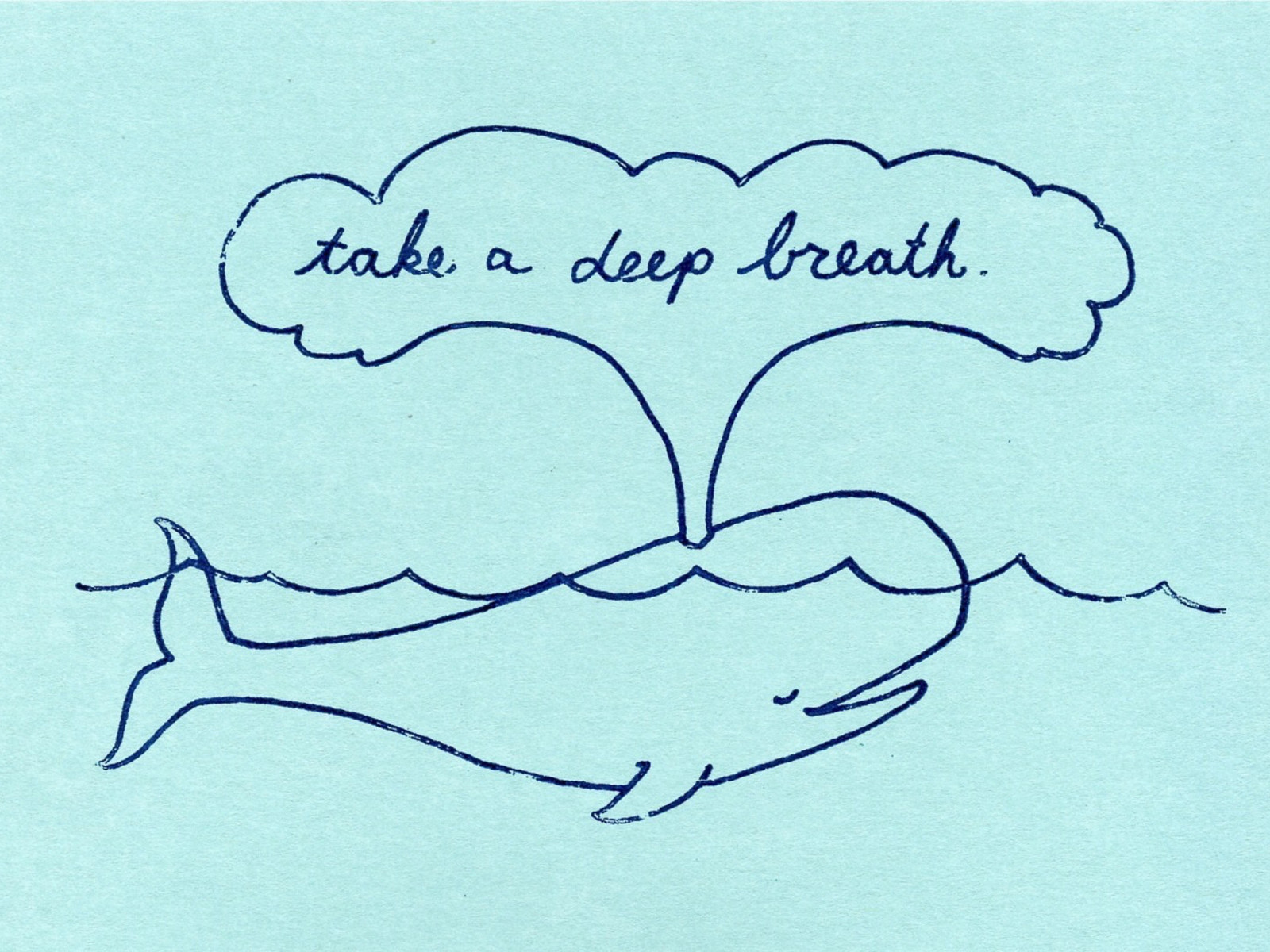 [Whole Class Activity] Have the class go through and walk them through breathing activity. 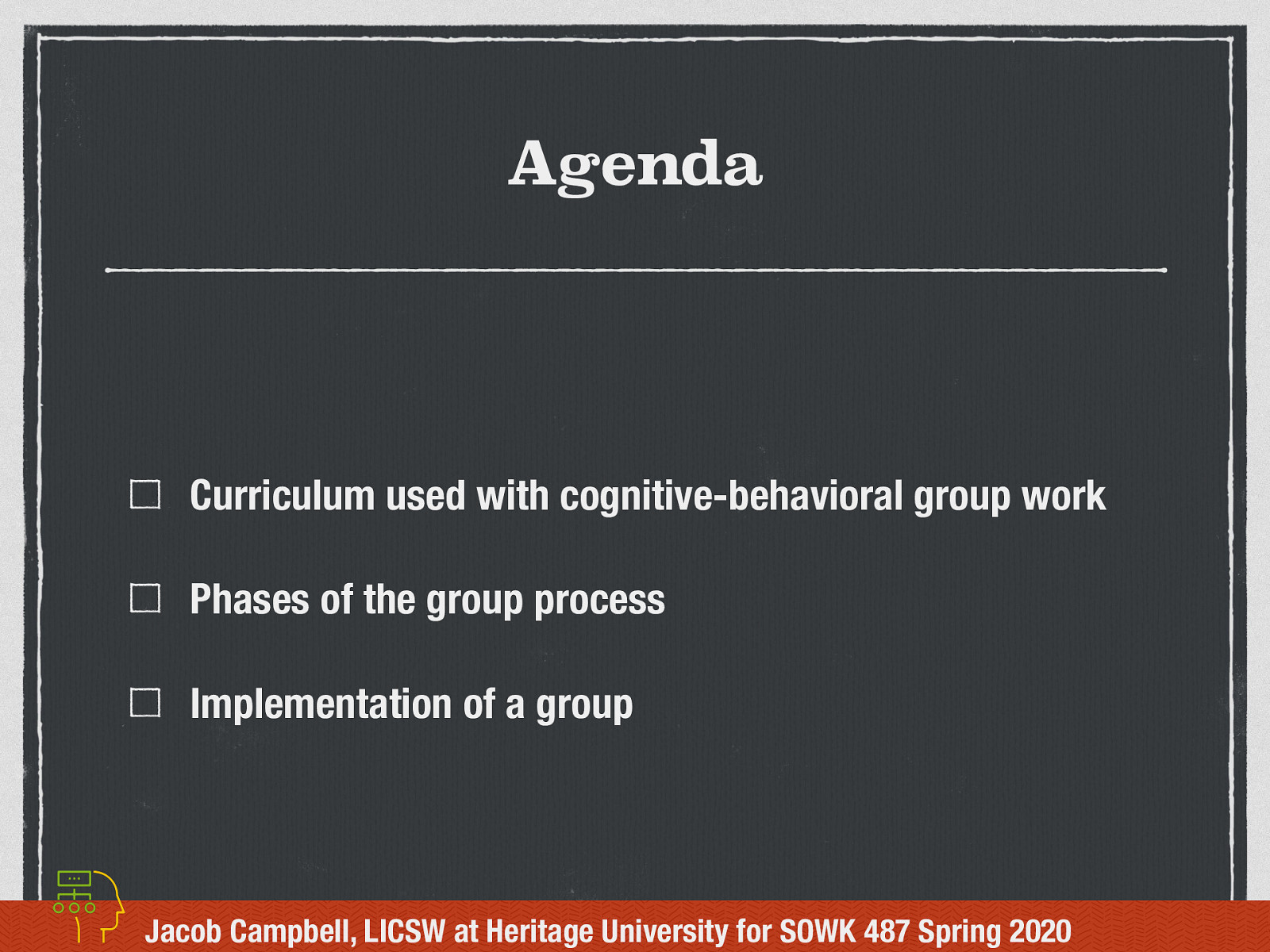 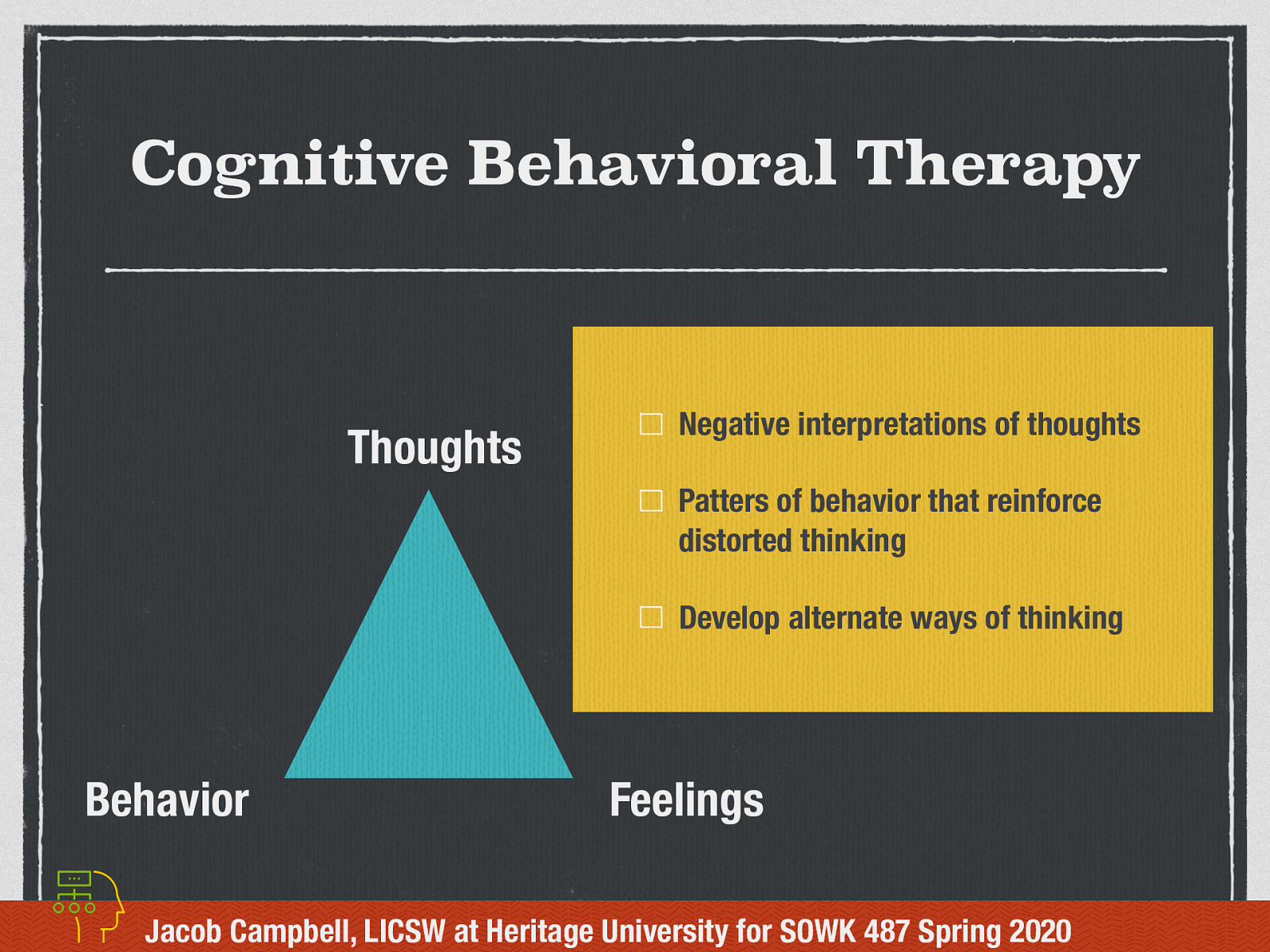 To start off our conversation about Cognitive-Behavioral Group Work, I thought that it would be helpful to discuss what is Cognitive behavioral therapy— CBT, a therapeutic approach which can help people with a wide range of mental health problems.

CBT is based on the idea that how we think (cognition), how we feel (emotion) and how we act (behavior) all interact together. Specifically, our thoughts determine our feelings and our behavior. This is sometimes referred to as the cognitive triangle. 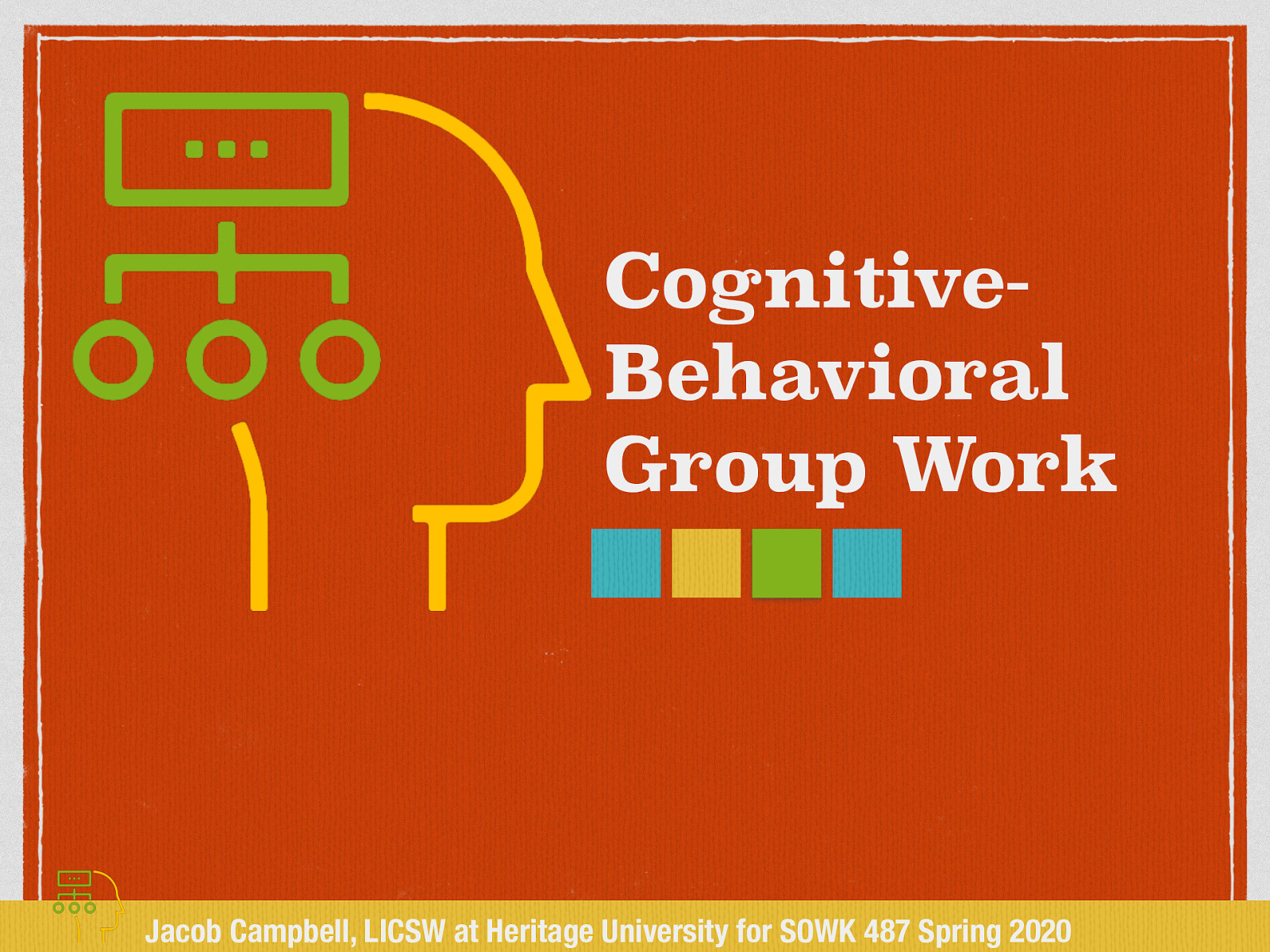 Cognitive-behavioral group work (CBGW) is one of the most widely implemented treatment group approach. It is used to treat a wide range of services. 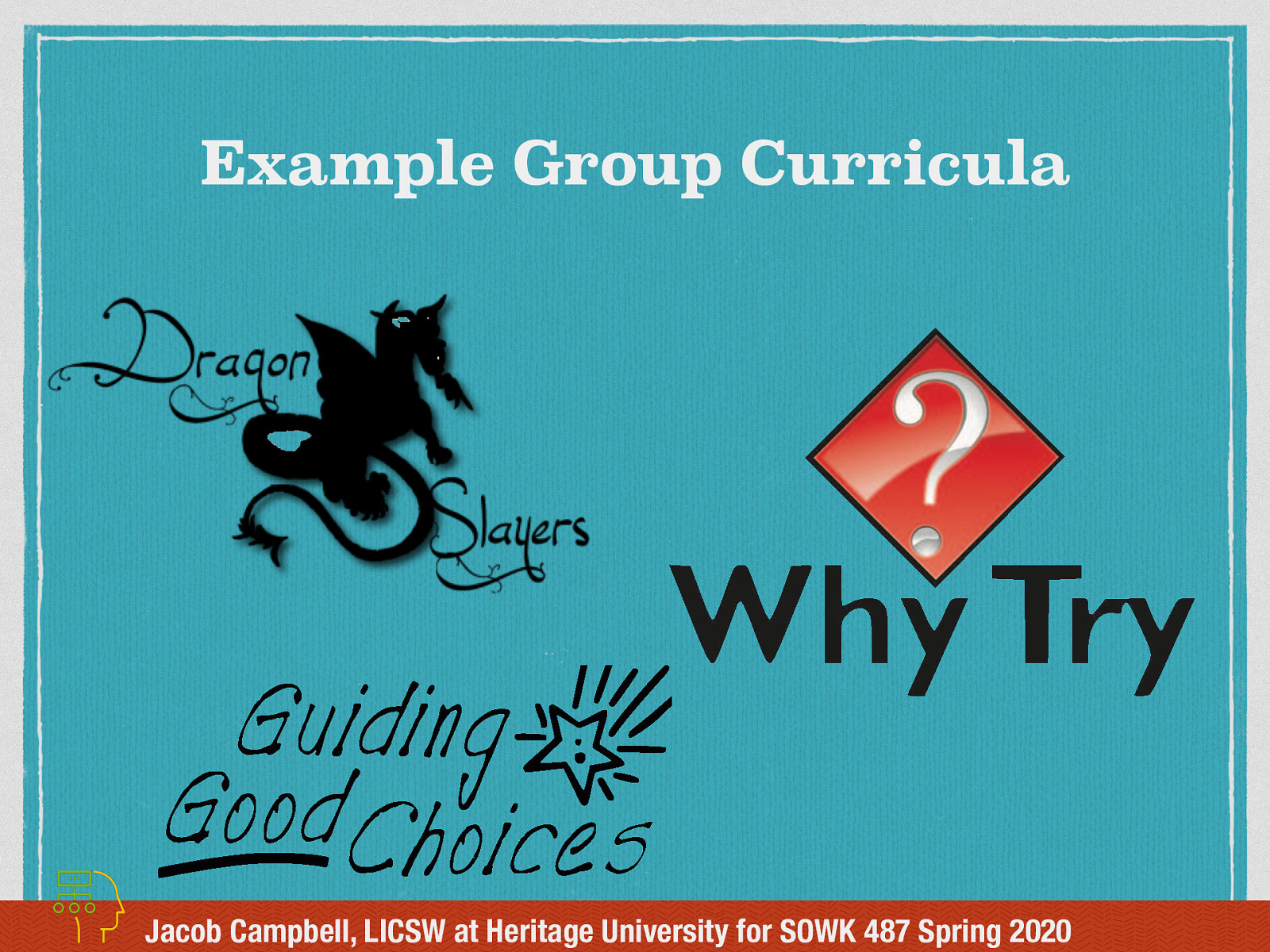 It might be helpful to see what some examples of group curriculum might be. While I would say that all of these curricula fall in the category of a Cognitive Behavioral Framework, they aren’t necessary 100% Cognitive-behavioral group work…

[Whole Class Activity] Have the class break up into three groups. Give them time to look over the material for each of the curriculum.

[Whole Class Activity] Discuss what they saw in the curriculum, what stood out… etc. 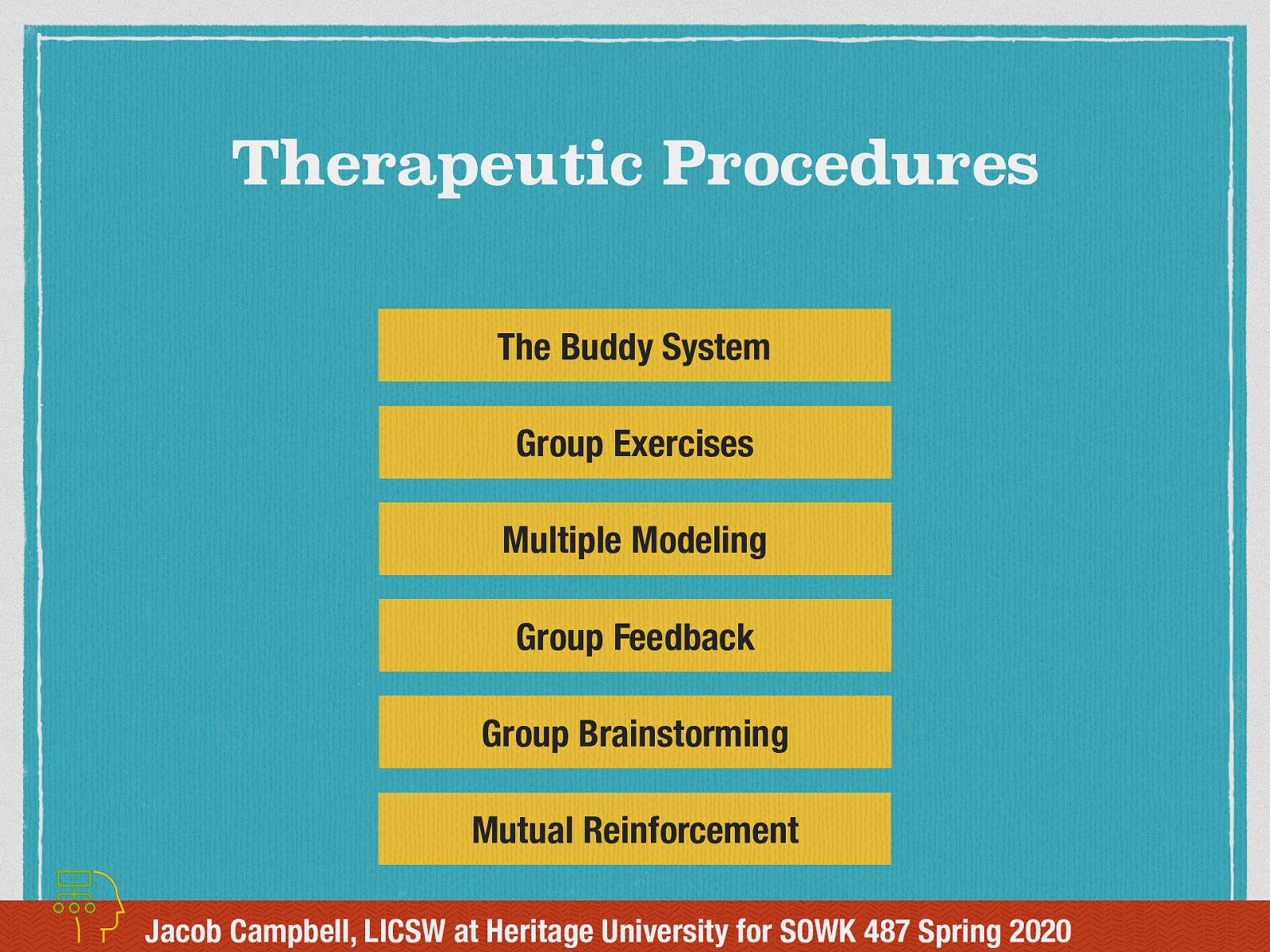 There are some therapeutic procedures which are either unavailable or less efficient for individual treatment and are often implemented when doing CBGW.

Some of the therapeutic procedures which are implemented in doing individual CBT can also be used in CBGW. 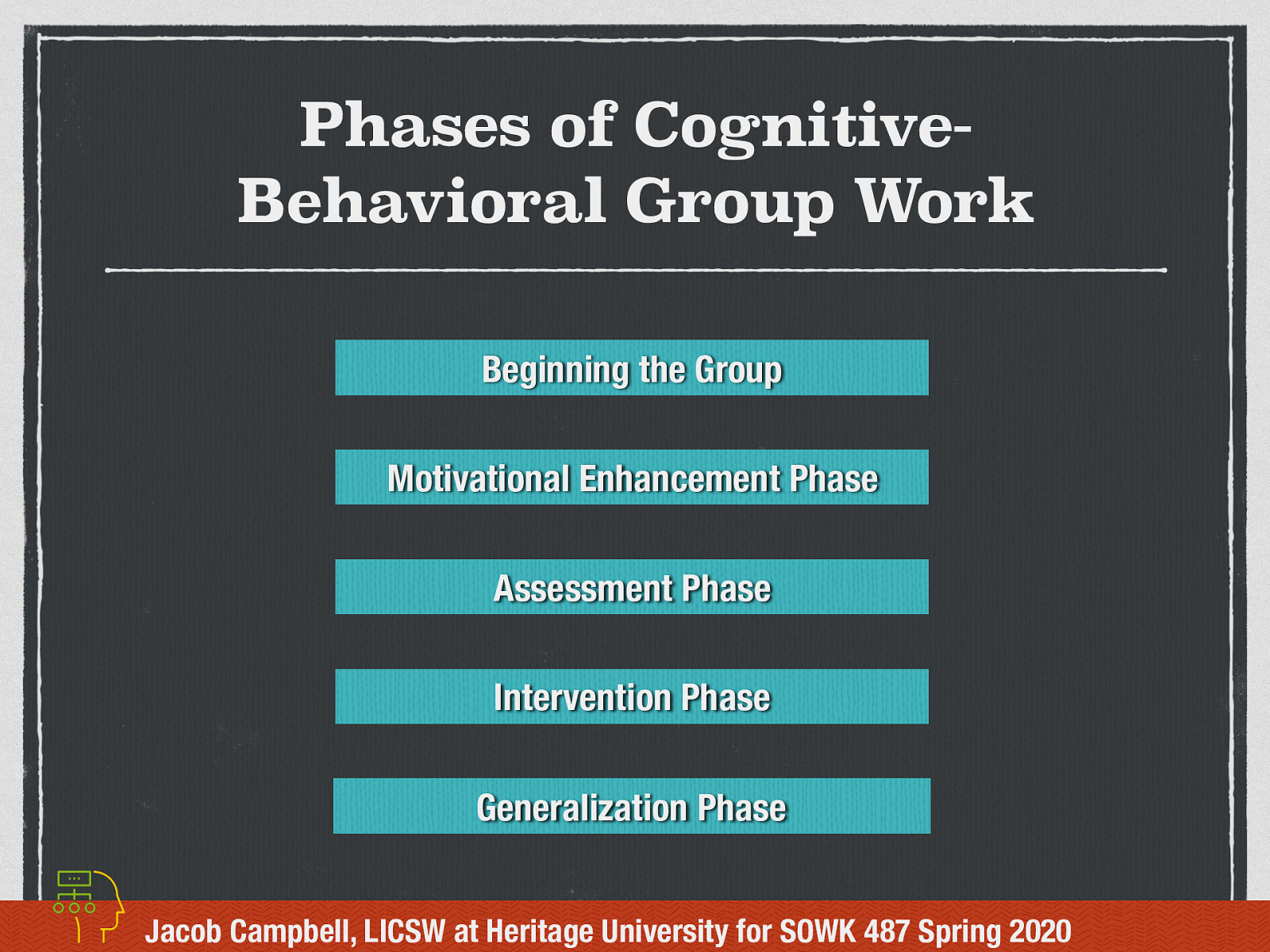 The phases identified for CBGW are as follows: 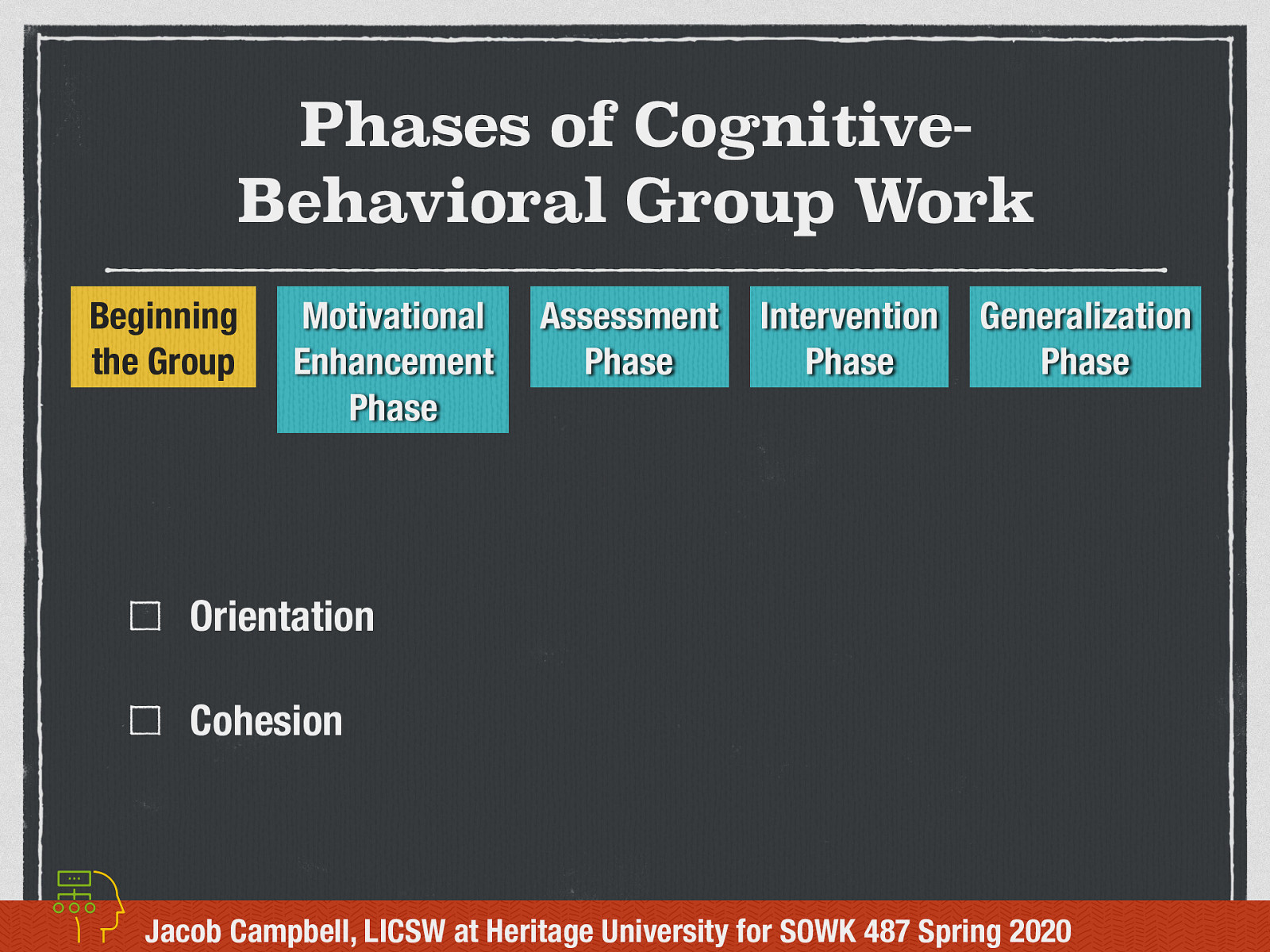 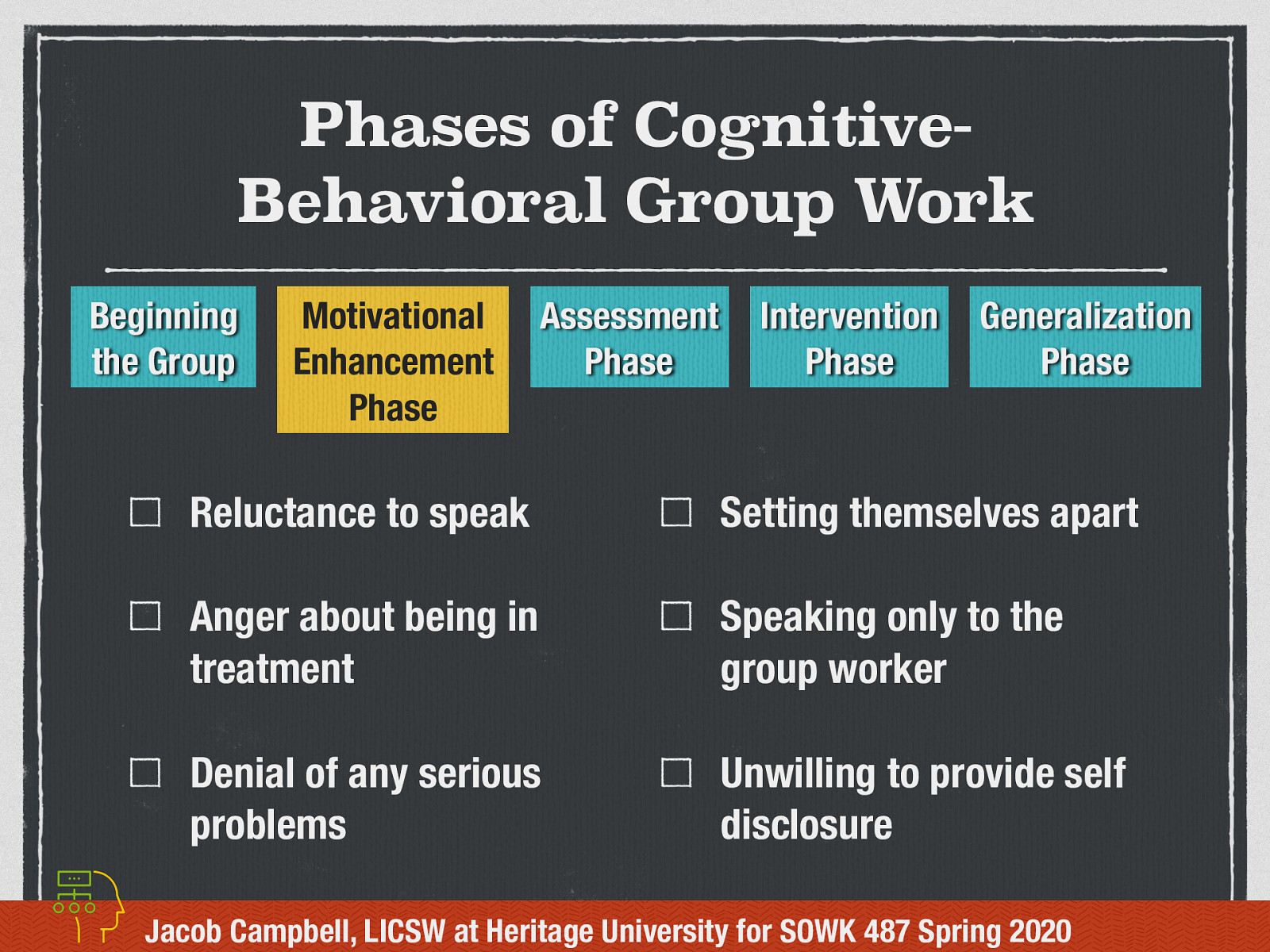 Generally in a CBGW there will be time that the worker focuses on increasing the motivation of the participants. This might mean addressing ambivalent or negative views of the group. These can look like…

[Whole Class Activity] Talk about possible strategies and ways of addressing these as a reflective exercise. 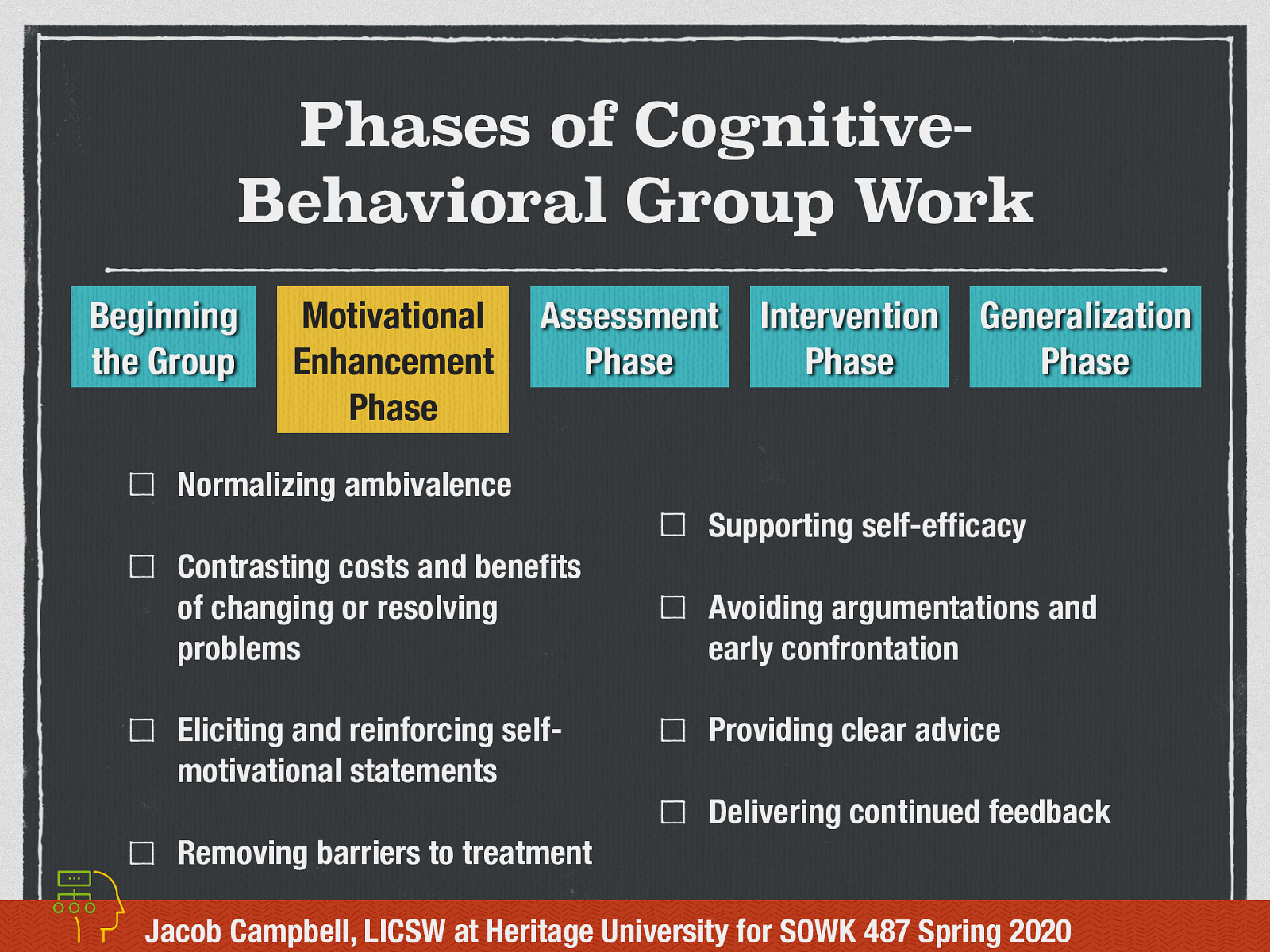 Some common processes in enhancing motivation include… 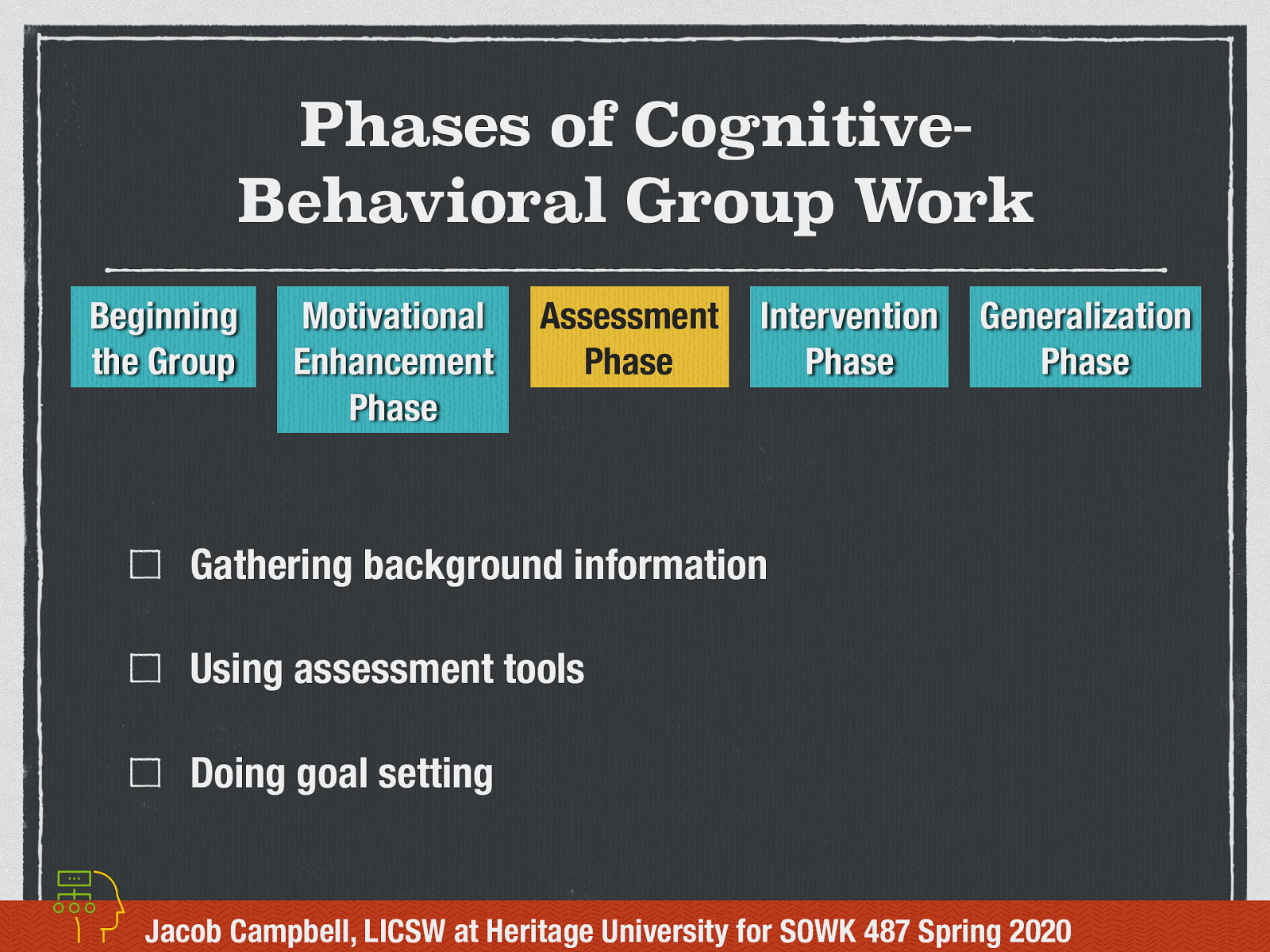 In the assessment phase it might take place before the group or in the orientation phase as well as throughout the group process. In this phase the worker is: 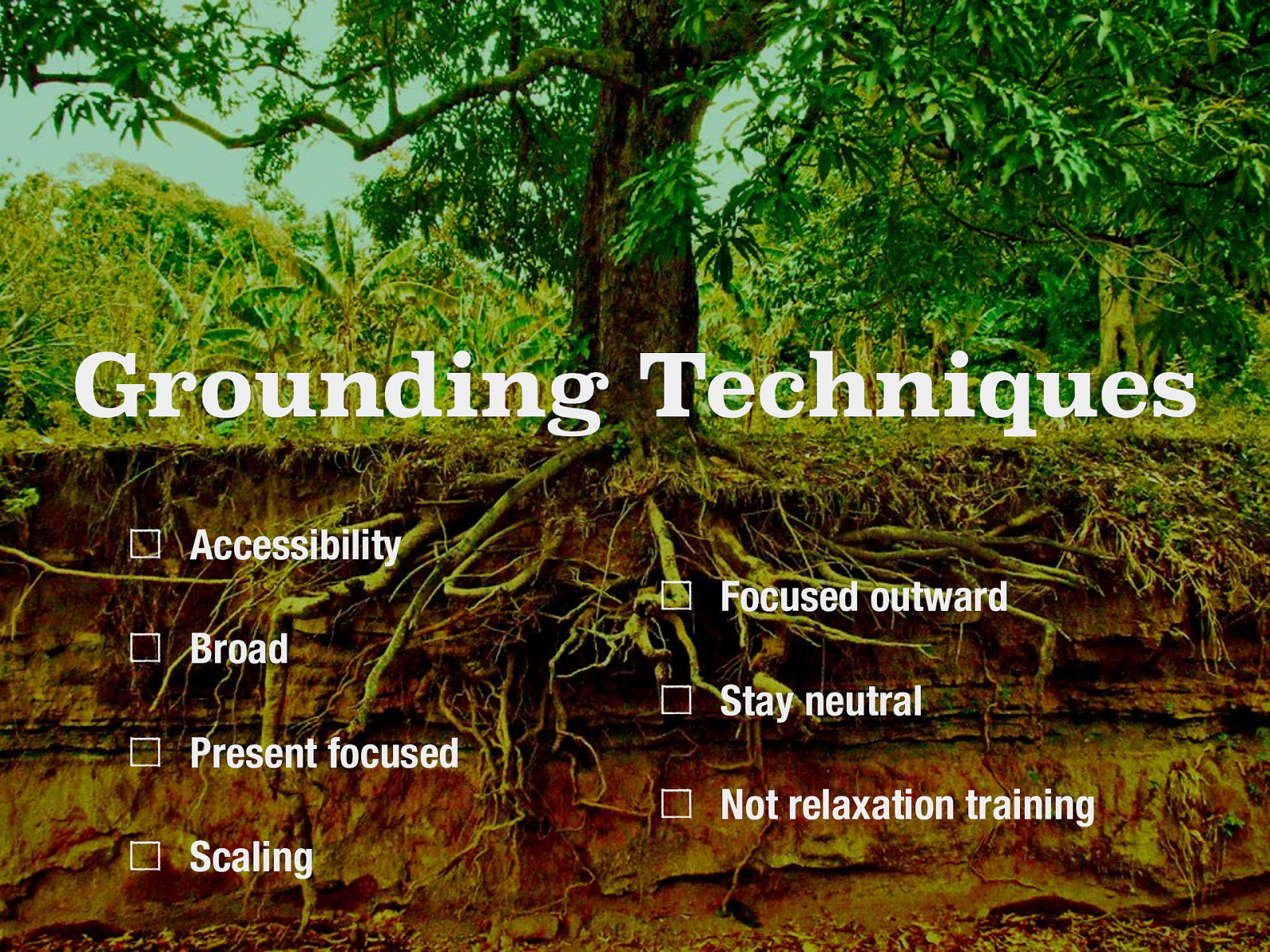 I want to share with all of you a tool that that I have often taught to clients. Grounding is a set of simple strategies to detach from emotional pain. To be grounding, it should fall under the following guidelines…

[Whole Class Activity] Review the sheet. Practice some of the skills / discuss them. Talk about how it can be implemented in a group format (in part or whole) 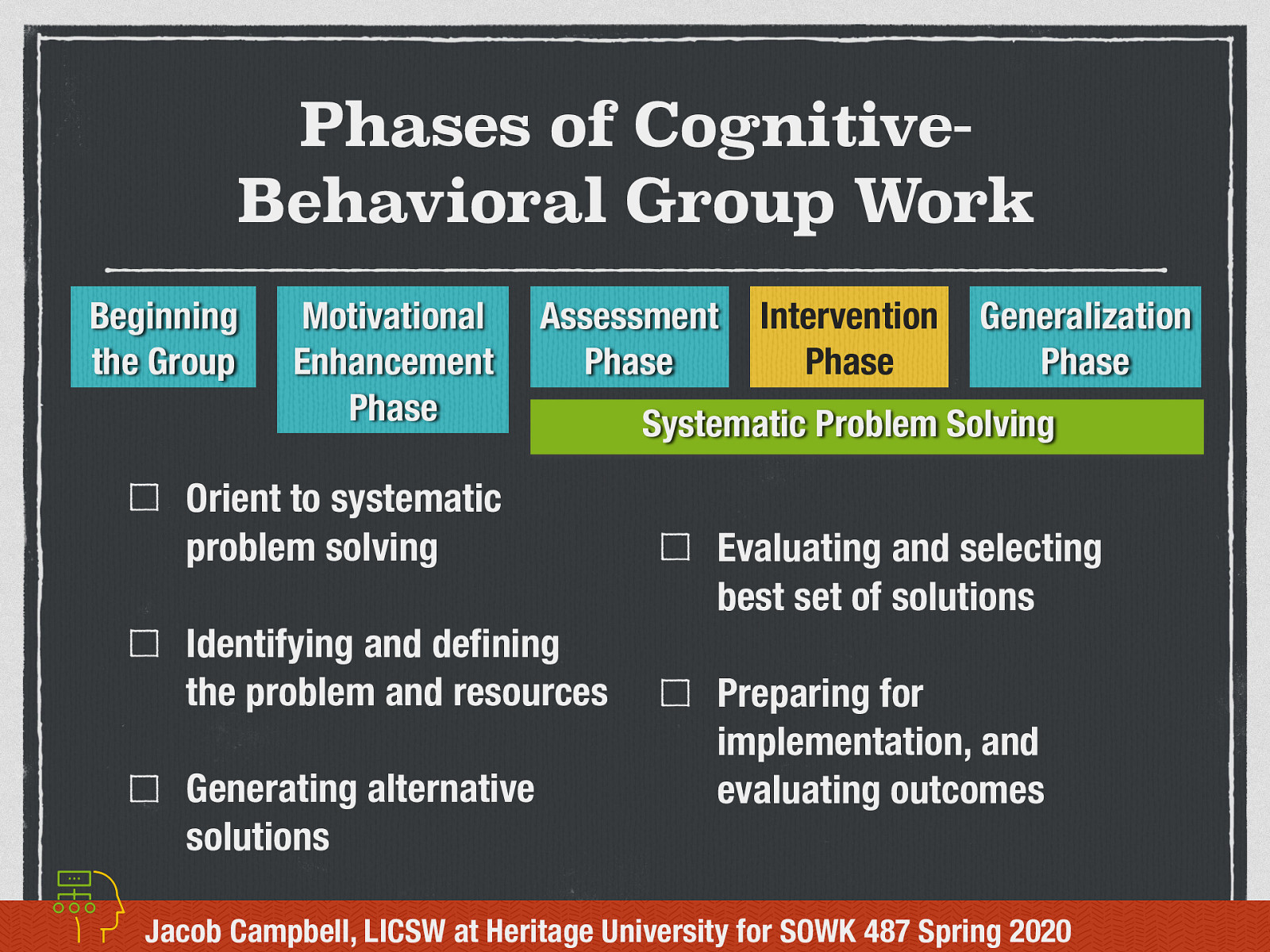 CBGW encompasses a number of different types of interventions that can be implemented. One of these is…

Systematic Problem Solving is where concerns brought to the group and discussed with the group usually includes: 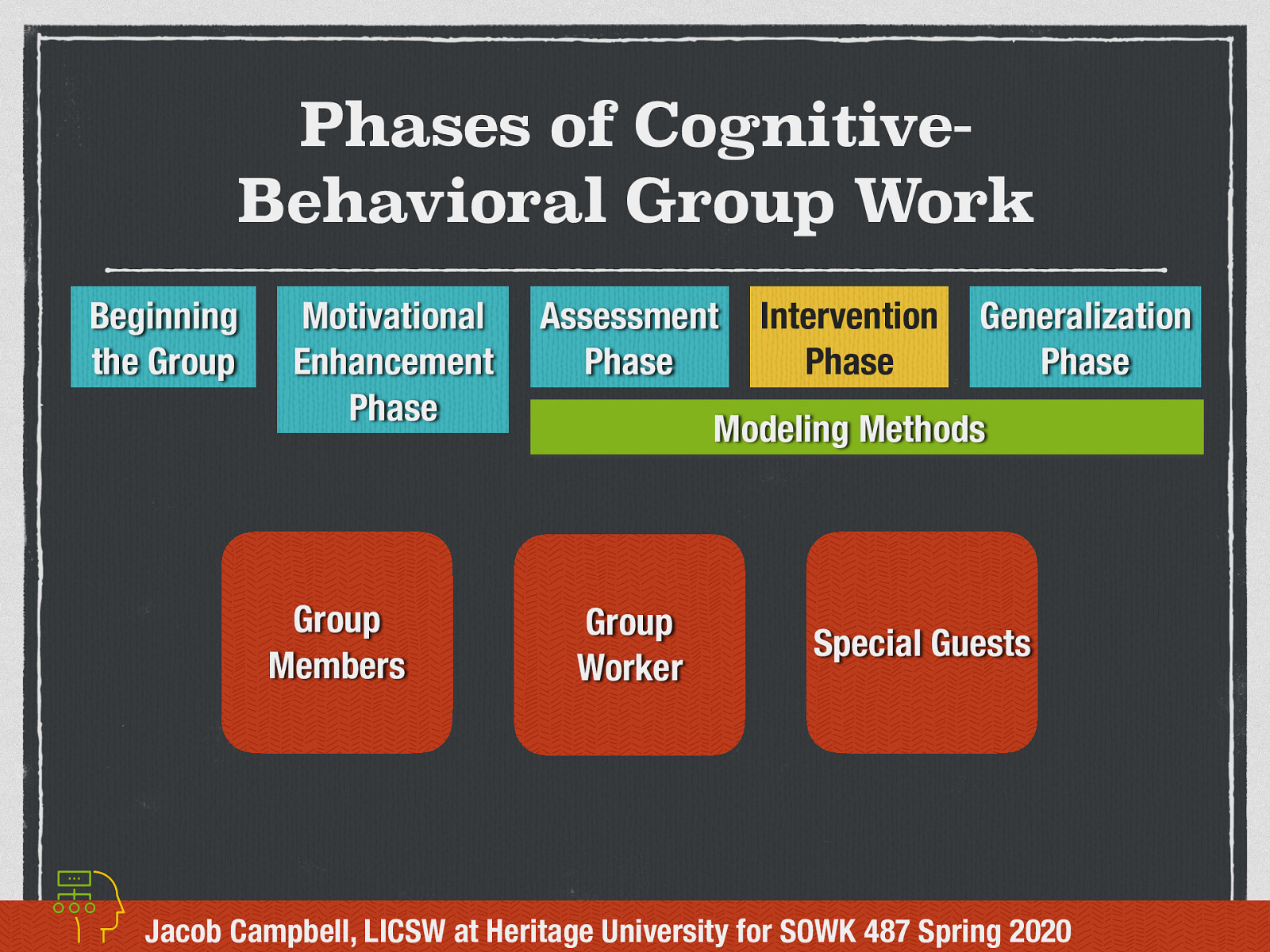 Modeling Methods is the use of role-plays (simulated demonstrations) 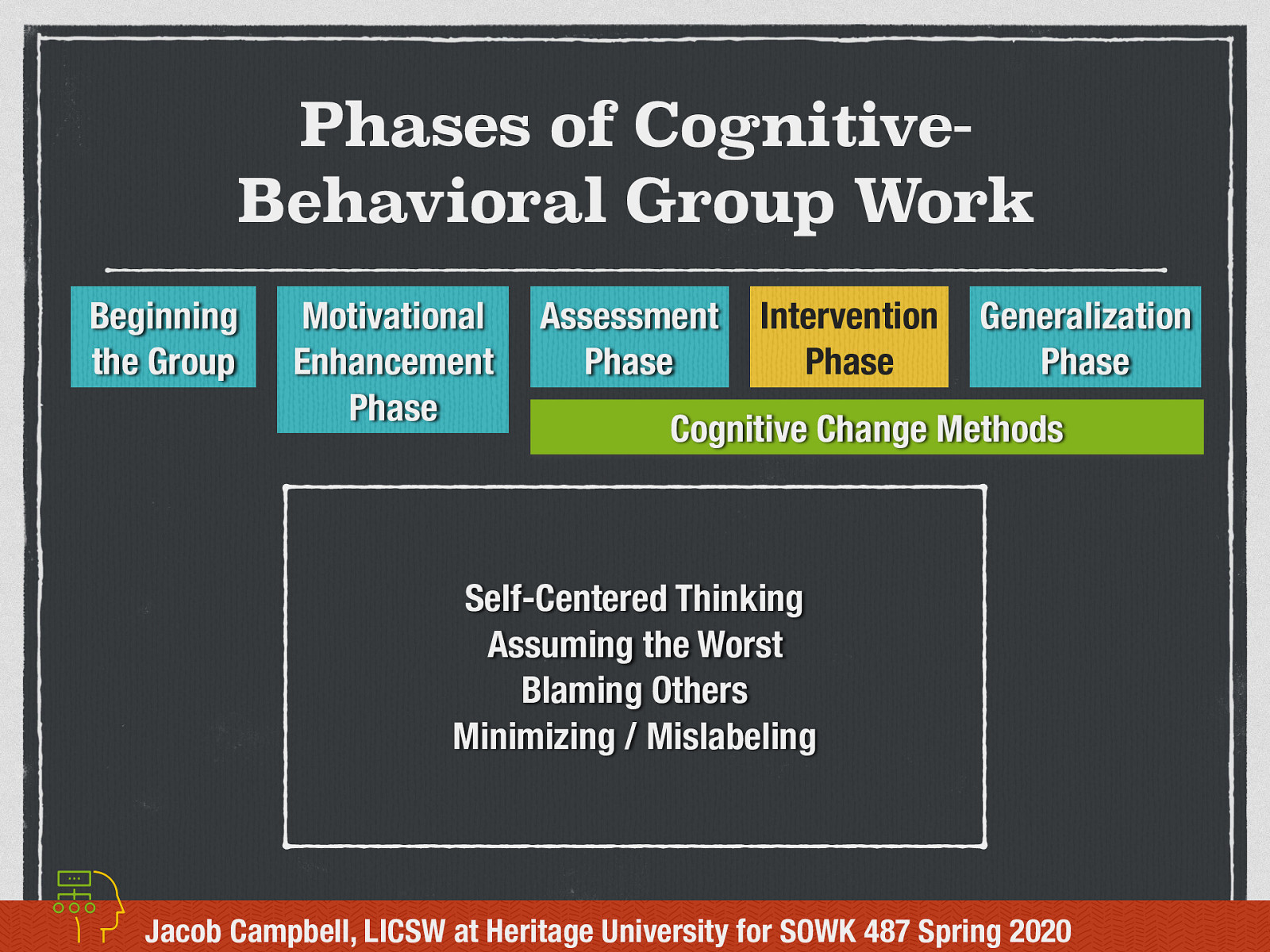 Cognitive Change Methods is the bulk of types of interventions used in CBGW. The focus is on correcting distorted cognitions and replacing them with coping thoughts. This is often times done through the techniques of cognitive restructuring. In ART, the following are the thought distortions they teach:

Self-centered Thinking: Thinking about only your own needs or interests, not caring about others. One example is saying “If I lie to people, it is nobody’s business but mine.” Assuming the Worst: Acting as if the worst outcome in a situation is the only possible outcome. Thinking people are out to get you. One example is saying, “I might as well lie, people won’t believe me if I tell the truth.” Blaming Others: Not accepting responsibility for your choices and consequences. Making it seem like someone forced you to act how you did. Saying someone else is responsible. One example is saying, “People make me lie when they ask too many questions.” Minimizing/mislabeling: Trying to make something ‘okay’ by making it less than or different from what it really is. One example is saying, “Everybody lies, it’s no big deal.” 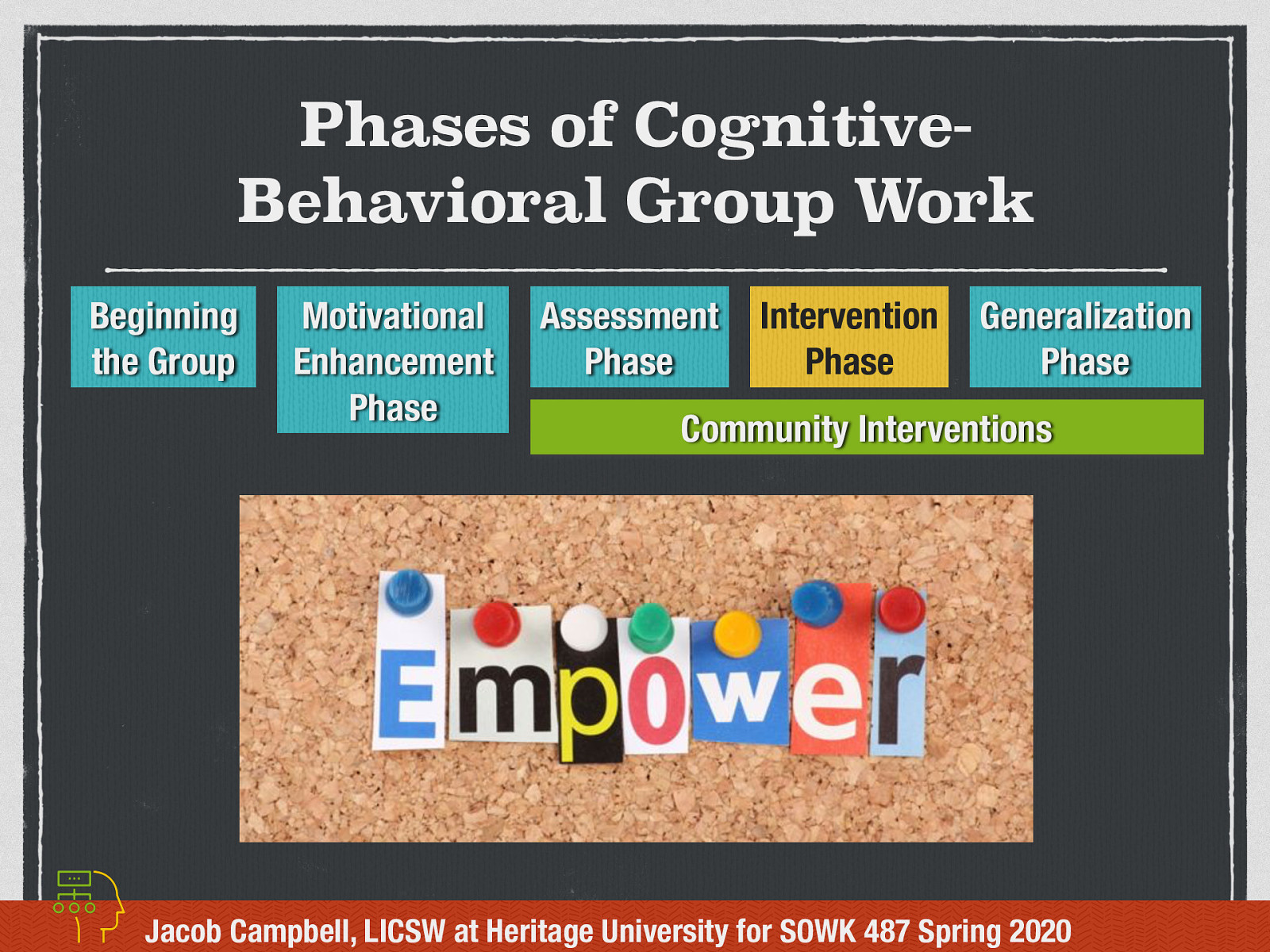 Community Interventions is the getting members involved in outside processes such as organizations, volunteering, etc. 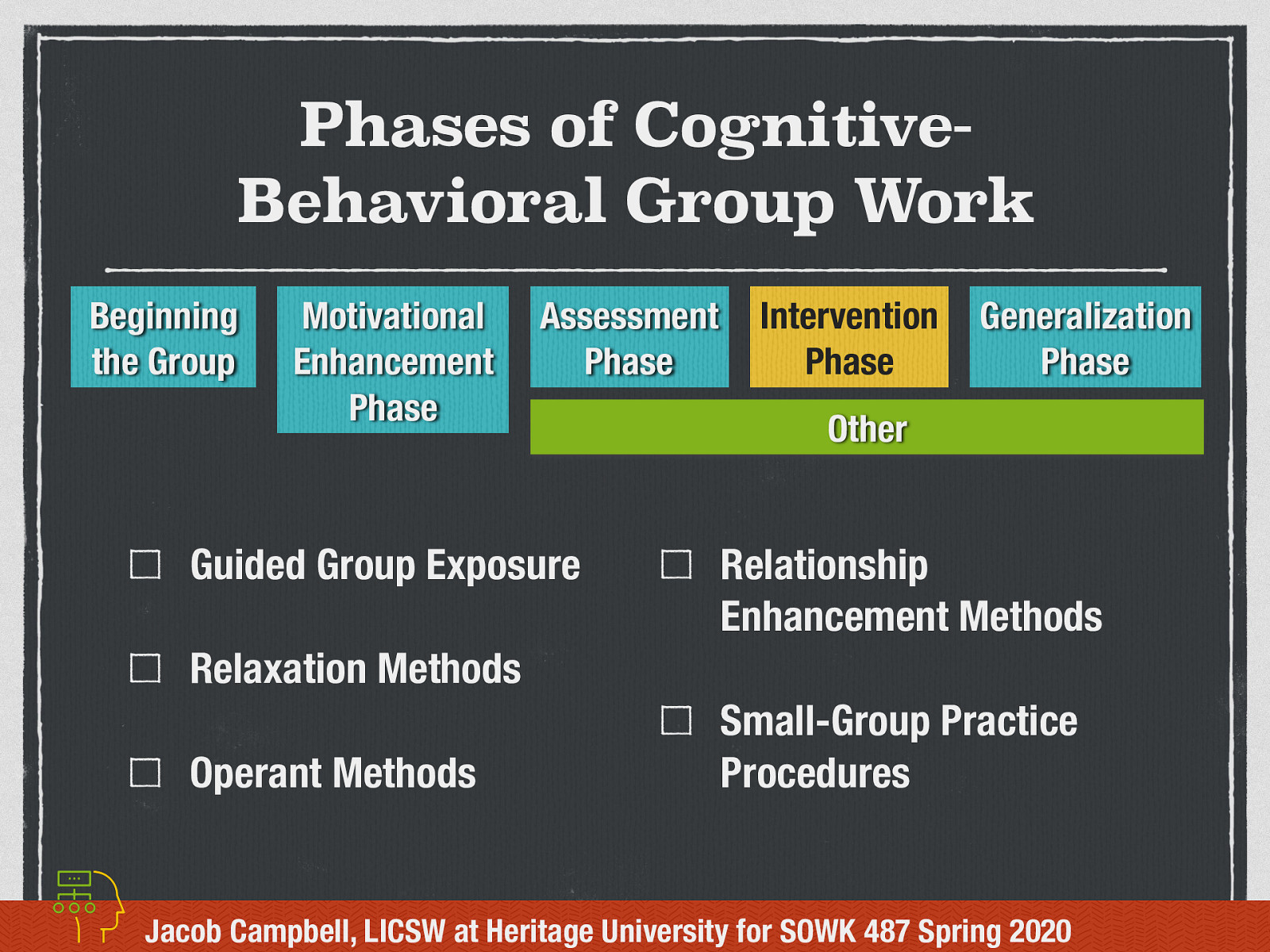 Some other interventions include… 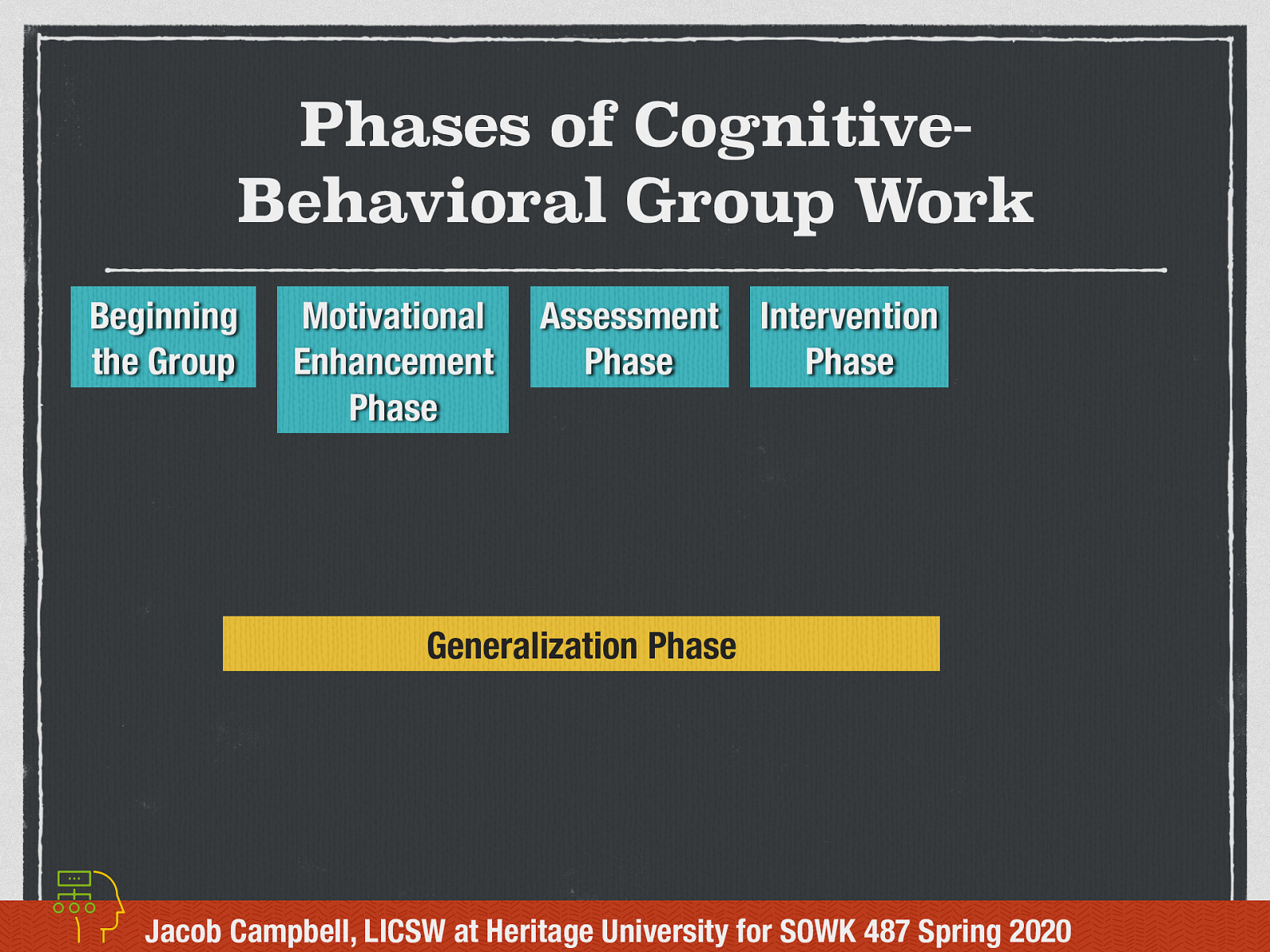 The preparation for transfer of skills to the world.

Often throughout the whole process. 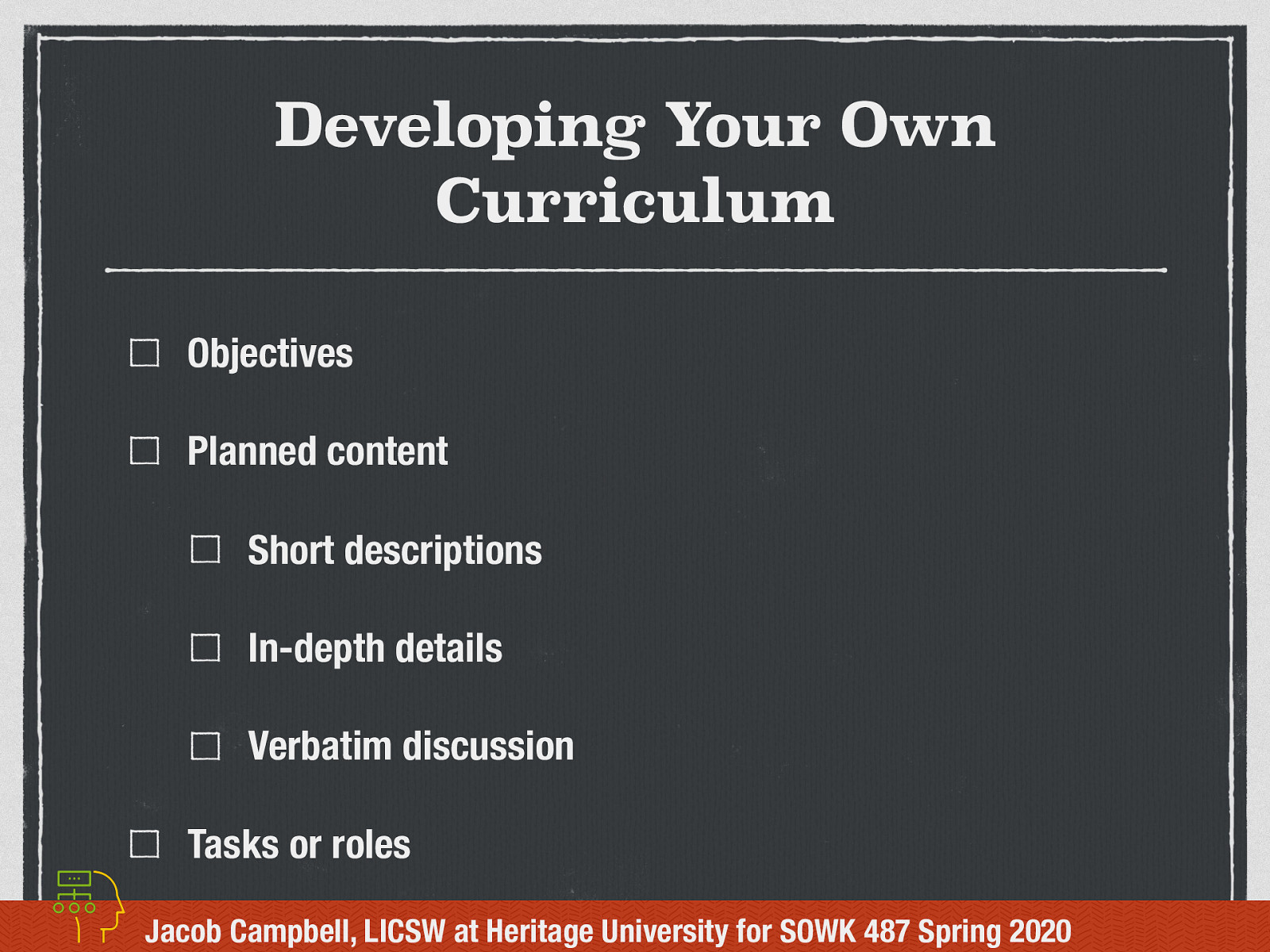 Developing Your Own Curriculum

What would a group curriculum look like if you were to create one for a therapeutic group?

[Activity] Work with groups of four. Pick a topic for a group. Spend time thinking about what type of curriculum you would do, what parts you would include, and what are some of the information you would do. Plan one of the sessions. 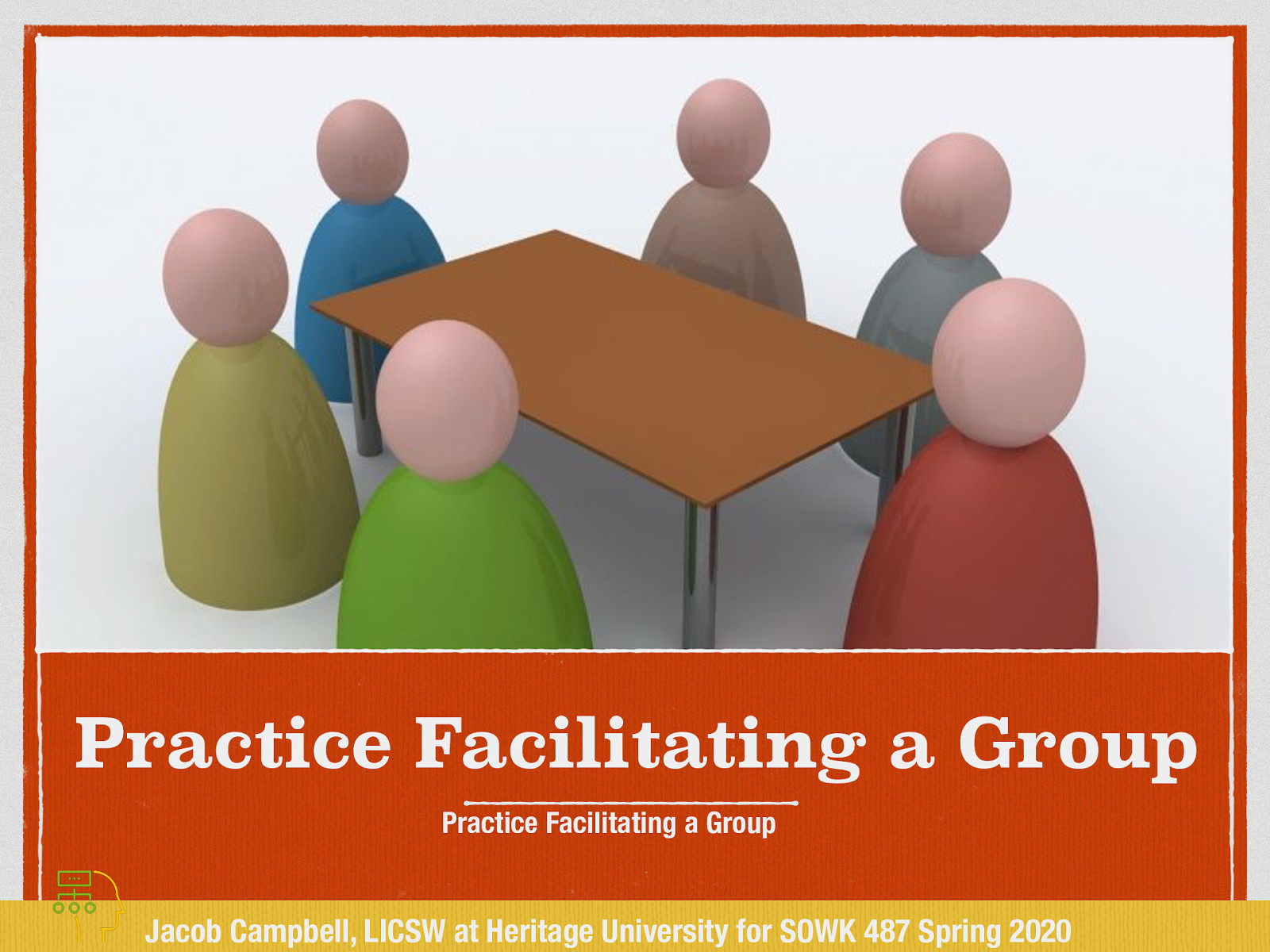 [Activity] Divide up into four groups. Pick one of the group sessions that you previously designed. In shifts of 15 minutes each, rotate through each getting an opportunity to facilitate from where the previous group leader left off.